How vaginas work in models?

I'm very new to Mmd, and I am trying to figure out how vagina/anus work on a model. I've seen people's models, and in the patch notes, they refer that those body parts work somehow. At first I assumed that there must be some sliders to control these parts, but I turned out to be wrong. I also noticed something weird (the insides of the vagina exist), and I think they exist for some reason. Could anybody explain to me how these body parts actually work? I'll very much appreciate any kind of explanation!

Not all models have vaginas that can open. The ones that do usually have sliders to control it. Some models also have bones in the vagina that allow you to control the movement better, but that is rare. 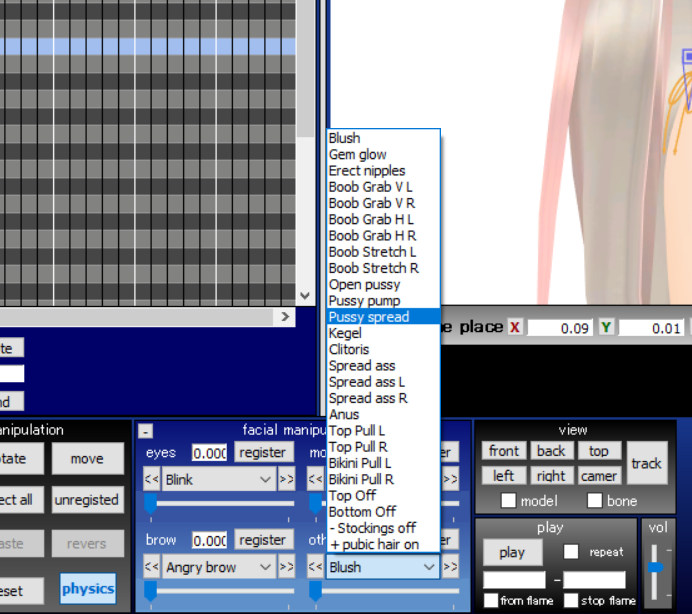 Oooh I see, that's true. Why is it so rare tho? Do these kind of models cost money or something? Or it is just difficult to make? Thanks for explaining by the way!

Is it hard to make a working vagina? kinda, I'd suggest giving my model I try, no the best model out there but it's free.

Most of the free model edits by JandJ and Guthix have working vaginas. It is extra work, but it is a nice feature. I think some Japanese model makers avoid it because of censorship issues in their country.

I haven't edited model vaginas, and its quite rare within my reuploads.
most working vaginas are on tda clones cause they use the same one.

Rinkun wrote: "Why is it so rare tho?"

Reason 2, because it's tricky and tedious to drop model parts at the correct height. Tda Iroha Nekomura is 88% of Tda Miku's size, and that's 88% length legs, 88% width hips, 88% torso size, 88% iris radius, 88% of everything. But Tda Rin Kagamine is a lot harder to know the size of. Some Rin are 100% of Miku's size, some Rin are ninety-something of Miku's size, and some Rin might only have shortened legs combined with with 100% of Miku's foot size and hip width, etc. You never know how various people have edited a Tda model before it's your turn to edit it. On top of that, some nude Tda Rin wear high heel boots, whereas other are barefoot with flat foot underside. So there is plenty of tiresome testing and guessing of the height and scale before you actually are ready to drop the advanced vagina parts onto your target model.

(It's easier if a model is rare. Tda Iroha Nekomura is all new and the creator himself https://www.iwara.tv/users/drcossack has actually told me that her size is 88% of Miku's. And limited testing and guessing made me realise that 1052C Neru is 96% of 1052C Miku's size, knowing that humans in general prefer even numbers such as 96.0000000%.)